To bicycle solo, even for one day, in Vietnam is to be a participant on a journey of contrasts. In the midst of my sunny, hectic morning commute out of yet another Vietnamese city (this time, Nha Trang), my attention was drawn to a street brawl that had suddenly erupted on a sidewalk to my right. Shouting, fists flying, an unexpected churning melee in the midst of a mass of tourists. It reminded me of a brawl at a Minnesota ice hockey game; no winners, two players ejected into the penalty box, and the game goes on. I moved on, too, but it made me think of the heat and the humidity, the crowdedness of the cities and towns I roll through daily, and what it means to tolerate each other in a land where boundaries seem hard to define. 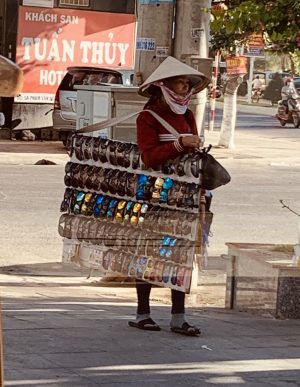 I saw more boiling-point tension as I rode an elevator down from my Airbnb apartment on the 23rd floor of a high rise this morning. It seemed that each of the eight lifts operating this morning were, like the one I was in, having to stop at each and every floor to squeeze in yet another family of four and their luggage, all bound for the beach or tourist destinations around town. They just kept piling in, no sense of what I as an American would call “turf”.  By the time we had hit the 16th floor, we had pretty much packed our particular car, and yet it still kept stopping at the next floor. A vanguard of three stout women, rolling their eyes and grumbling to each other, had had enough and fanned out at the elevator door. When the doors slid open at the 13th floor, all three of them shot their arms out, like Charleston Heston parting the Red Sea, at a trio of Japanese teens with Gucci bags slung on their arms about to step on, and shouted (in my imagination) “we’ll rip your eyeballs out and put them on clearance at Banana Republic if you even THINK of trying to get on this elevator!” to the startled girls. “Find another!”

This is where the comedic timing of an Abbot and Costello routine injected itself into the scene. One of the women triumphantly punched the “close doors” button inside the elevator while, simultaneously, one of the spurned Gucci girls punched the down button in the hallway to call up another car. The result: our elevator doors slid 2/3rds shut, then re-opened in response to the call button. More muttering from the mothers, close doors punched, doors about to close, then the Gucci girls reappeared again as the doors slid back open. This happened several times. The captive residents of the car collectively rolled their eyes. “Don’t touch that f*#%ing button until we’re gone!” barked one of the Valkries finally, and the doors slid shut one last time.

By the time I got to the lobby, I was drained. 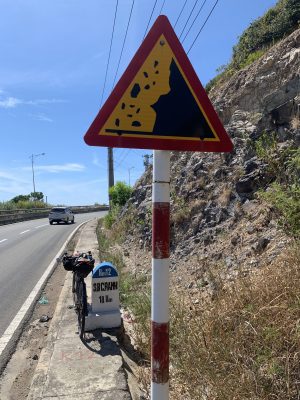 Much of my route today traced the shoreline of Cam Ranh Bay, where roughly 80% of all US forces fighting the Vietnam War had entered country. It was a major hub for all four armed services from 1965-1972. Being aware of this history, as it has been for all of my journey through Vietnam, has helped me with my sense of place as I’ve biked.

On August 9, 1974, Gerald R Ford became the 40th president of the United States, succeeding Richard M Nixon who had resigned earlier that afternoon. Watching him take the oath of office as I laid on our living-room’s burnt-orange shag carpeting in front of dad’s rocking-chair, I asked, with 8 year-old naivety, “who’s that?”

“The White House plumber,” Dad replied, and went back to his rocking

On 3 April 1975, North Vietnamese forces captured Cam Ranh Bay and all of its military facilities.  Saigon fell soon after. No plumber would be on hand for decades to help clean up the mess that had been left. 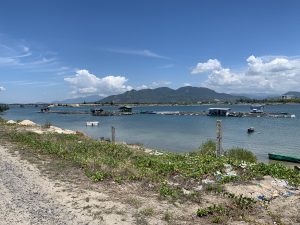 And I, weary from heat, low on water, and annoyed by a sudden vibrating hum that had begun in my front tire, decided it was time to stop fighting the current, and pull my boat over at a shady storefront, satisfy my thirst and start some sleuthing on the errant sound. A thin old man, perched on a lawn chair in the shade before a glass of water, watched me keenly with rheumy eyes as I worked on my bike. He shouted back over his shoulder into the depths of the store, calling up a sleepy boy. “Do you sell cold water?” my Google translate asked, and the boy pointed to a refrigerator case in the corner. As I reached for a cold Coke and two waters (an all too common daily routine for me), my bicycle, unhappy with its tentative perch, suddenly fell over with a loud bang. The old man howled and waved his arms at me. Fumbling with the Coke, my wallet, Google translate, and for my bike, I must have appeared quite the goon to gramps.

After the dust had settled, the old man waved me over to a plastic chair next to him, and there we sat, in the shade. Traffic fought and buzzed its way past the store, a flowing rapid river of noise and exhaust I had ridden all the way from Hanoi in the North to this place over the past 20 days. Each time I had to re-enter the current, it was like waiting for that set of elevator doors to slide open so I could dive in past the howling Maenads to jockey for a place along the crowded sidelines. No wonder a cold can of Coke brought me comfort.

Later on, the old man’s son stopped by, and eventually asked the question that had been burning between us. “Are you an American?” asked Google.

“You in the Army?” asked the son, pantomiming a machine gun under his arm.

“No, but I know several who came here long ago “ I said, all the while keeping my eye on their body language.

“I’m here to bicycle across your beautiful country for a cause to help cancer patients heal, and while I do that I am painfully aware of the legacy my country left behind here” I translated.

More nods between dad and son. The son continued to stare me down with a “you DO realize who you are?” look in his eyes.

“Two days ago I visited My Lai Memorial and left my prayers there,” I typed and handed the phone over. The son looked back up at me, nodded in pain, then relaxed his stare. He turned to his dad and translated. Gramps let out a long sad sigh and sat back further into his lawn chair.

“His bicycle is broken,” the old man said after a pause, and waved at my steed. Together, the son and I got up and walked over to the bike. Helping me steady it while I readjusted the front fender, where the noise had been coming from, we worked on it in silence. And then, taking the bike into my hands, I said “I have to get moving, there’s a storm coming.” We all shook hands. They sat in the shade and watched me as I left, continuing to trace the coastline of Cam Ranh, towards a immense wall of grey thunderclouds. 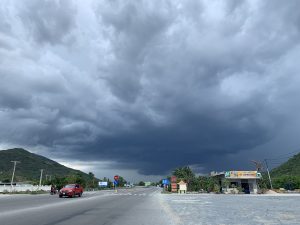 The contrast between blue skies and grey clouds was imperceptible; no clear boundaries. A sudden gust of cold wind hit my face and wiped the sweat away from my eyes. It felt good.

I drifted along, calmly, heading downstream towards the darkening horizon.