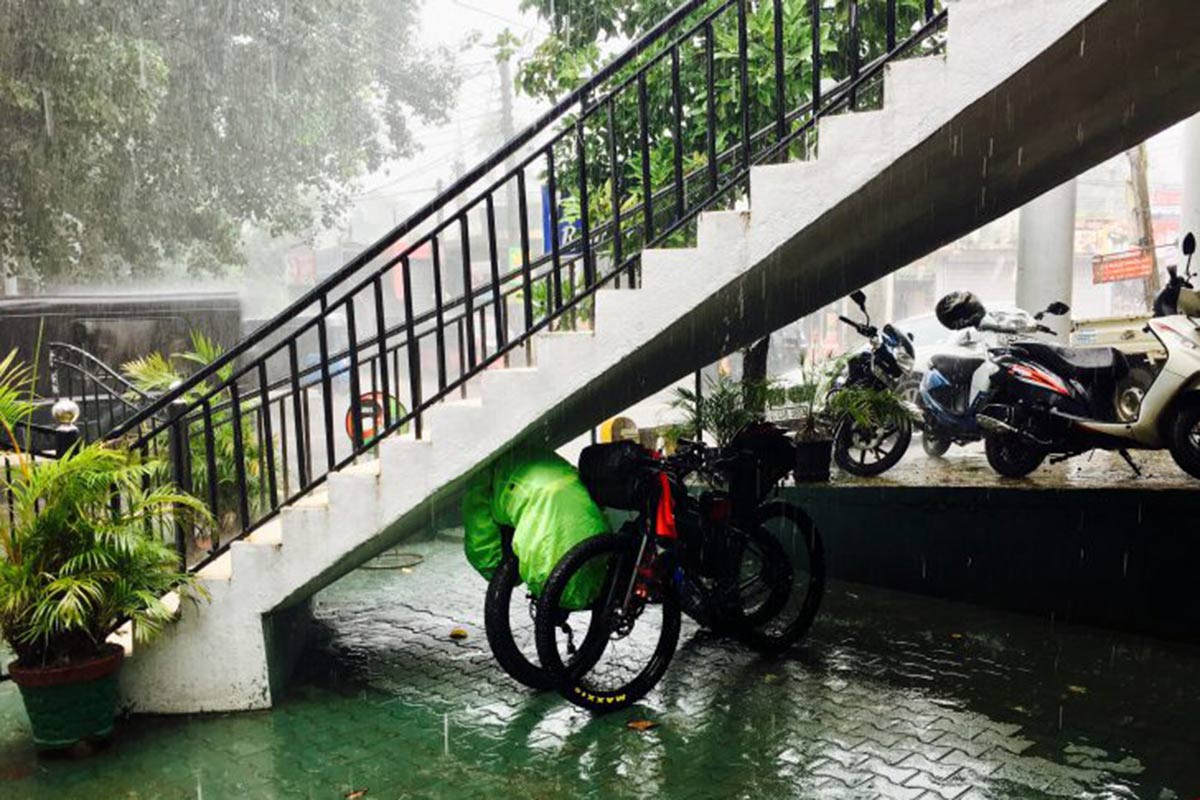 “Wisdom can be found traveling.”

There are two ways to move through the world; as a tourist, or as a traveler. The tourist seeks only to consume the world. The traveler is, instead, consumed by the world. Absorbed into it and by it. What we experience becomes a part of us. As the poet Rilke tells us “only when [memories] have changed into our very blood, into glance and gesture, and are nameless, no longer to be distinguished from ourselves,” it is then that we know that the world has become a part of us.

Last night, I sat next to a young Hindi woman from India on the long flight from Mumbai to Paris. It was the second of three legs on my journey home from a month spent in Sri Lanka, bicycling for a cure for cancer. By the time I get home to Minneapolis from this journey, I will have circumnavigated the entire globe with my bicycle. That’s 25,000 miles! What a distance to fathom. 800 of those miles were at the helm of my fat bike, navigating, experiencing and witnessing all that rolled past me in 27 days. I ended up being absorbed by Sri Lanka.

The recently married Hindi woman, however, was having a hard time absorbing the concept of distance and time zones. She was leaving her familiar world of India (the only life she had ever known) to fly to Seattle, WA to settle down with her newly-wed husband in Spokane, and help run a hotel. In very basic English, Bonipiti asked me for assistance understanding the wrinkled flight schedule she gripped in her hands. I was more inwardly concerned with what a culture-shock Spokane was going to be for her.

Sitting barefoot and cross-legged in her seat, she pointed to the departure time of her Delta flight from Paris with her long, gold-painted finger nails, and then to her arrival time in Seattle, WA:

Departure from Paris: 9:35am (implied that this was a Friday morning)
Arrival in Seattle: 10:30am (Saturday morning implication)

“So, Paris one hour from Seattle?” she asked?

Using an empty coffee cup and Google translate on my IPhone for quick English to Hindi phrases, I pointed to the handle on the coffee cup, “Here, Mumbai, ok?”

She nodded. Moving my finger 45 degrees along the rim of the cup, I said “here Paris. Eight hours”. Her eyes widened. “I’m going to be on this plane eight hours?” her look said.

“Oh it gets worse, baby” I quipped. Skipping the Google translation for that, I moved my finger from Paris past the halfway part of the cup rim and said “here Seattle. Eleven more hours.” She slumped in her seat. “No, no, no!” she denied, vehemently, “Seattle one hour from Paris!” grabbed a passing flight attendant, only to go through the same conversation once again. She was realizing not only how big her new window on the world was, but just how far away from home she was actually going to end up with this guy. Outside my own window on the world, from 38,000 feet up, I watched the street lights of Tehran glittering at the edge of the Caspian Sea. Here I was, also far away from home, but bearing no concerns about the trajectory of my journey. Only curiosity. Eventually, Istanbul would be glowing on the western horizon. And by daybreak, the Dalmatian coast, Budapest, Vienna, and finally, a heavenly view of the majestic snow-capped Swiss Alps. I wiped the drool off the window ledge with my sleeve.

Approach your experiences of the world as traveler, not as a tourist. Think about the difference between those two states of mind for a moment.

A tourist, in most cases, journeys to different places and countries seeking to experience just enough that is different from the familiar that they feel they have “gone somewhere.” Most end up in tourist districts of countries that center their activities and the themes of their establishments (restaurants, sightseeing tours, tour guides, gift shops) around things already familiar to the tourist (and to the tourist’s pocket book), but have just enough of a flavor of that country that one feels they have truly experienced being, for example, in Sri Lanka.

Granted, this is one way to experience the world. But it is not a full taste or picture of what the world is really like. Bonipiti, my dark-haired, poised row-mate, is in for a full immersion, whether she likes it or not, once she settles down in the Pacific Northwest. No wonder we cling to the things that are familiar to us, when we find ourselves in unfamiliar surroundings. Most humans don’t like change. But change is inevitable. And it can be for the betterment of ourselves.

One who moves through the world, deliberately, is an adventurer. They seek to approach new experiences without deliberation. They love to improvise. They embrace change, because to be changed is to grow. The traveler abhors and avoids any marketed/packaged image or experience of what others may think the traveler wants to see and experience. The traveler, instead, wanders over to the other side of the tracks, away from the neon and glitter, to seek genuine encounters with the world and with people.

The traveler doesn’t need a brochure. Doesn’t seek out a Starbucks or a KFC for an illusion of comfort when they find one in a foreign city. The traveler, especially the long-distance bicycle traveler, generally improvises his or her encounter with each day. No itinerary, in most cases. Just “Point A” to “Point B”. What lays in between the two is called “the adventure”, and becomes the distilled “true” image of the land and culture they seek to be consumed by. Decisions to stop for tea or sustenance or water are based on happenstance, a vibe about the way a food vendor sweeps the dirt in front of his shop, being brave enough to wheel up to someone standing along the road to ask directions, or simply upon the fact that there may be a hundred kilometers of desert about to be crossed, and the food stand you find yourself leaning your bike against is likely that last one you’ll encounter for the next 2-3 hours of riding.

The traveler enters the dark entrance willingly, already knowing what kinds of structures, stares or conversations await inside:

The traveler pushes the limits of daylight without worry or complaint, most often arriving at their destination well after dark, tired yet energized by all that has been packed into their day of observations. Once one has experienced what it is truly like to be a traveler in the world, there is no turning back. No substitute. It’s in our blood.

Here are some of my top ten memories from 1200km biked through Sri Lanka with a Siberian-Russian named Michael (we cunningly dubbed ourselves “Team George Michael”):

I realize that, for the past four summers now, I have been willing to “disrupt” my life for 4-5 weeks in a way that, to many, may seem odd. I forego the monthly income I need to make to cover my rent and other expenses, instead giving that work to someone else. I save up and invest in buying plane tickets and needed gear for the journey. I’m in debt to the many friends, family and supporters who chip in to help cover what I might not be able to come up with (food and housing expenses for 30 days, etc). Then I fly with my bike to a more remote, different place in the world each summer, and for 30 days bike in intense heat, over dangerous road conditions, improvising my way through language barriers, all the time asking people back home to donate $10, $20, $50, $500, or $1,000 to benefit cancer research.

Ultimately, it’s all worthwhile if people actually respond to my cause, and are moved by being able to see what I have seen.

I don’t do all this seeking how many “likes” I can get with each posting. There’s actually a price for admission to join me on my bike and to see all I am seeing, but you get to name your own price. Fifty or so of you did so, and by doing so you helped me raise over $6,00 towards my $8,000 goal for cancer research.

You are amazing. I thank you for recognizing the value of this experience, but more so for understanding the needs to fund cancer research. Yet, I’m still short of my modest goal. If you came long for the ride, but haven’t been able to contribute yet, here’s how you can help me meet my goal (and THANK YOU):

Be a traveler in the world.