Termites Are Attempting to Devour My Bicycle

So far we have pedaled our way 250km into the heart of Sri Lanka via bicycle. I’m starting to get used to recognizing subtle indicators of

when we may or may not be entering or leaving a Sri Lankan town. Sometimes its difficult to tell because I’m so used to knowing the difference between American rural and urban city limits versus what I’m encountering here. When I crossed the USA from coast to coast solo via bicycle the summer of 2014, making such determinations was much easier than this. You’d see a rural cemetery show up on the horizon, and then you know soon after, you’re gonna hit a town. You see a highway sponsorship sign say “this section of roadway sponsored by Boy Scout Troop #23” and you’d know there’s an American town coming right up. You even know by then how actively civic-minded the town is, depending on whether its the local 4-H involved in the highway cleanup or the local funeral parlor.

But being on a bicycle across Sri Lanka, not knowing how to interpret the language on the signs, not having a sense of when one thing begins and another ends, you strain to look for a pattern, not matter how subtle. It’s a challenge because, like the dogs that are scattered along the roadway every 5-10 yards or so, so are various Sri Lankan road-side stands, lean-tos, or even just your simple typical lemonade table set out by the neighbor kid on a hot day kind of stand. Yellow coconut stands. Fruit stands. Vegetable stands. Nick nacks. Stuffed monkeys, etc. There are a constant stream of stands going by as I bike, so repetitive in appearance and frequency that it’s hardly noticeable 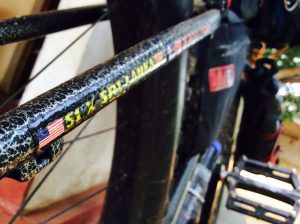 when the pattern shifts; like the “cut and paste” background of Fred and Wilma Flinstones’ house during those chase scenes between Dino and Bam-Bam (yes, I am a child of the 60s). Hanna-Barbara, as an animator, must have known something about human psychology and attention span when he decided it was easier just to let Americans see the same background flashing by during those chase scenes rather than go into detail. I mean, who cares, right? America is not too much different today, except for the fact that the average American’s attention span won’t last as long as a chase scene between Dino and Bam-Bam.  Nowadays it’s down to 90 seconds, the length of a commercial.

Being able to understand and to appreciate the sharp contrast (monotonous-like as it may appear to be, even over here) to what’s flashing past, largely unnoticed, at the bottom of tv screens on the walls of typical 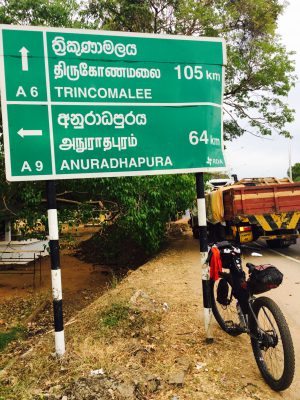 American homes and businesses is one of the major points of taking a journey like this. There’s a reason I threw out my tv shortly after graduating from college; being able to smell a salesman or a commercial coming a mile away is one of the major benefits of having done that. Wanting to care and even notice what’s in the background of everyday life here and in other countries I have seen (and intend to see) from the seat of a bicycle, all taken in at 12-15mph, outdoors, is an even bigger benefit of having jettisoned my tv.  Getting all of you to take notice, to have you follow along, and to consider making similar changes in your life is a not so subtle part of my ensuing crusade.  That was certainly my friend Carolyn’s goal in life, after she completed her solo ride across the USA.  To show others that they, too, could do this.  And why they should make these journeys.

“You must change your life.” -Rilke (Archaic Torso of Apollo)

As I write this, I’ve noticed hoards of termites are attempting to devour my bicycle.  See what I mean?

“Make voyages. Attempt them. There’s nothing else”

I’m George Maurer, and I’m riding across the Asian country of Sri 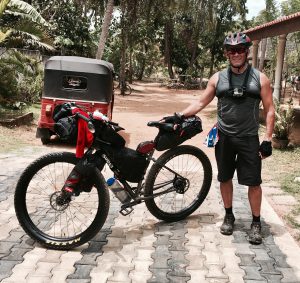 Lanka for the next month, in support of a cure for cancer.  Please support me in my quest to raise $8,000 for cancer research at Mayo Clinic. To date, $40,000 has been raised in 3 summers of rides for a cure.