Sealed With a Kiss From Sri Lanka (Day 3) 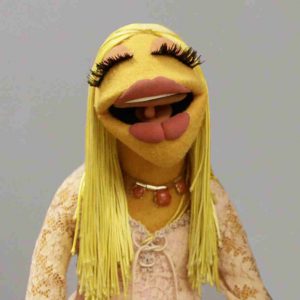 in the Central Province of Sri Lanka (in ALL of Sri Lanka, for that matter); so constant, that it’s hard to ascertain the hierarchy of sound to begin to start describing. For example, early in the morning, I’ve noticed the sound of a bird whistle (not a chirp, not a caw, but an actual low pitched whistle) that for some darn reason reminds me of Janet, the Muppet in the Muppet band Dr. Teeth and the Electric Mayhem. You know her…she’s the blonde-haired tambourine player, constantly flipping her long golden Valley Muppet-girl hair and exclaiming “for surrrrre!!” It’s that same flippant use of pitch and cadence that this bird is using. I haven’t seen it yet, but I’m imaging something Janet-the-Muppet-like if I ever do see it. Likely it’ll turn out to be more sophisticated than Janet.  But you never know. 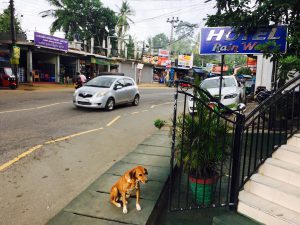 Then, add a layer of wild dogs barking to this band-width. Dogs are everywhere in Sri Lanka. Like, every five yards, there’s a sun-blasted flea-harassed mutt, scratching itself, hobbling along aimlessly, or flopped purposely on its side in the dirt, one ear lolling on the white borderline of the highway, listening. The hum of our approaching fat tires gives them good reason to raise their heads, quizzically, as we glide by. The hum of fat bike tires on the pavement obviously does not compute, and so at the sight of a Siberian-Russian and an American on souped up fat bikes, their little brains scramble into intercept mode. I have made due note of this, and actually prepare extra berth between my left exposed leg and these canines’ canines. I expect this pattern to continue the rest of this ride across Sri Lanka. Several have given chase. Adrenaline ensues. 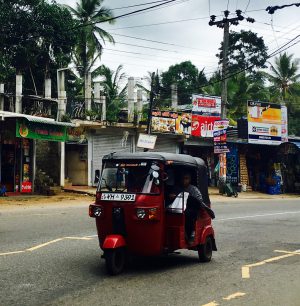 beep-beeps of the whirling dervish-like Turk–Tuks; the individually tricked-out tri-wheeled passenger carts that serve as the national taxi of Sri Lanka (and double as mobile billboards for proverbial sayings by Captain Jack Sparrow, Che Guevara, and Jesus Christ). Even though I’m constantly using my right hand side mirror on my bike (traffic runs on the left side of the road in this former British colony) to see what’s coming up behind me, its usually the quality (and pattern) of the horn that lets me know what vehicle is approaching, how fast its approaching, and whether I’m soon in danger of losing my right leg (even as I work to protect my left). Tuk-Tuks aren’t a hazard, really. I imagine them to be like little charismatic, colorful, zippy minions on wheels. They just “beep-beep” as they zoom up happily from behind (sometimes two abreast of each other, vying for an opening in traffic) to let you know they are approaching, but they really aren’t out for a piece of your 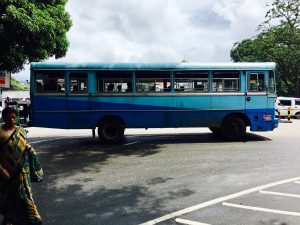 butt. Leave THAT up to the lumbering, multicolored giant Franken-buses (imagine a dump truck mated with a Greyhound bus and won a hand-paint job for the impossible accomplishment). Those monsters give one long LOUD air blast that about blows you off the road from about 50 feet behind you; a blast that proclaims “BIG BULLOCKS COMIN AT YA, GET YOUR ASS OUTTA MY WAY!!!”

And you had better.

They usually travel in pairs. 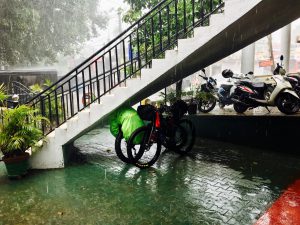 And then there’s the gentle falling of the cooling, Sri Lankan Monsoon rains, washing all this mayhem away, and lulling you into short periods of contemplation and respite, several times a day. They don’t last more than 5-10 minutes at a time, and pretty much fall straight down, as if they are of a water that is heavier than normal rain. The combination of rain dripping off of roofs, hitting the wide leaves of the trees, and then the low gurgled resonance of the deep cisterns just below the pavements slowly filling up, create a wash of white noise that soothes and cleanses. These rains stop as abruptly as they begin, serving as a cue for the dogs, Tuk-Tuks, and Janet the Muppet to resume their “look at me” cacophony….making you wish for just a little more rain.

And sharing the space in between all of these sounds both gentle and harsh are the sounds of happiness that I hear in the voices of most of the Sri Lankans I meet. Today I did some volunteer work (interrupted by occasional monsoon downbursts) at the Benedictine academy run by the monks of Monte Fano Benedictine Monastery here in Kandy, Central Province. 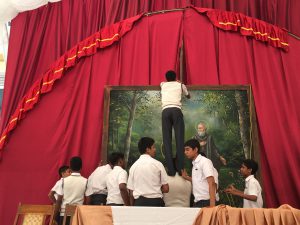 A whole school yard of kids were racing around in their uniforms; white pressed shirts and blue pants and shorts. Tomorrow is graduation day (also the Feast Day of their patron Saint Benedict), and so the entire school day was spent with various groups rehearsing their part of the program to be.  I watched with amusement as a small determined band of school boys worked to raise a giant portrait of St Benedict (borrowed from the walls of the cloister).  Benedict gazed patiently and benevolently from the canvas, face to face with a lad standing precariously on the shoulders of a classmate, determined to tie a knot that would rope the Saint into place behind the Dias. 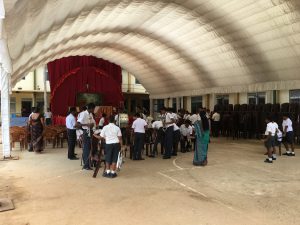 A small Ensemble of young musicians on trumpets, wood-winds, tubas, and snare drums startled me upon my approach into the school yard when they struck up a rapidly unravelling monophonic version of Brian Hyland’s 1960’s teen-angst hit “Sealed With a Kiss”, complete with bridge. Having performed the song with Brian a million times with Bobby Vee and the Vees over the years, I couldn’t have ever imagined hearing the song performed this way. Especially as performed by a couple dozen Sri Lankan school kids who don’t know who Brian Hyland or teen angst is.  Yet.  For some reason, hearing the sound of these little kids determinedly rehearsing a song from my experiences as a musician gave me a huge smile.  And more than a little angst for their music teacher.

The rest of the sounds that hit my ears heard today just gradually melted into the background. Now that I know them, they have become a part of the gradually shifting, textured soundtrack to the remaining days of this amazing powerful journey via bicycle across a small section of Asia.

I’m George Maurer, and I’m taking a month off from making a living this summer so I can ride for a cure for cancer, and learn about a country and culture I’ve never been exposed to. Please help me meet my goal of raising another $8,000 for cancer research at Mayo Clinic by donating now.

Your donation is 100% tax-deductible! Here’s how you can give: