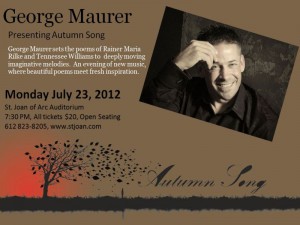 George Maurer has created the next layer of a long-term musical project based on the poetry of 19th century Austrian-German poet Rainer Maria Rilke. This layer brings in a theatrical element in a performance that explores what a musical conversation might have sounded like between Rilke and 20th century American theater great Tennessee Williams, who found inspiration in Rilke’s words as he transformed from heartbroken beach bum to iconic playwright.

Maurer has already secured four performances of 1 hour and 20 minutes on the program for the Provincetown Tennessee Williams Festival Sept. 20-23, has composed the music and hired the musicians, sound light and costume designers, and actors/vocalists who will portray Rilke and Williams.  Maurer and cast are presenting their Twin Cities debut of Autumn Song on July 23rd in order to raise the $15,000 in funds needed travel to and mount Autumn Song at the Tennessee Williams Fest, in Provincetown, MA, which draws the ideal audience for a piece like this.

“Autumn Song is my Sistine Chapel in that it’s an earlier work that will probably take my lifetime to build,'” says Maurer.   “Even as I add to it and touch it up, it continues to transform. I have received enough critical input on the concept and music that I know this is something I need to continue pursuing, and it is definitely the most artistically significant performance I have ever written.”

The music is Maurer’s interpretation of Rilke’s poetry, a song cycle based on 13 of Rilke’s poems that he completed in 2009 and have performed to critical acclaim. He has spent a lot of time with Rilke’s work and went so far as to take two trips to Prague, Rilke’s birthplace, so he could immerse himself in the settings where he wrote many of his poems. Through that process, George captured the essence of each poem and found a way to use sound to illuminate his words from underneath, so they leap off of the page into another sensory experience through music that touches on gospel, jazz and art song.

With the help of Director Jef Hall-Flavin, and singer actors Dieter Bierbrauer and Jared Oxboro,  Autumn Song adds theatrical performance to illustrate the areas where Rainer Maria Rilke and Tennessee Williams dovetail. Williams was a fan of Rilke, and their works shares subtle similarities. Hall-Flavin has created a script that uses music to explore a conversation between Rilke and Williams had they ever had the opportunity to meet.  Maurer has even set two Tennessee Williams poems to music as a part of this musical conversation between the two poets.

George has found it exciting to produce a work of this depth, and sees it as spiritual but not religious, a meditation that also surprises, and a far-reaching project rich with imagery, musical textures and, now, the visual aspect of theater, to capture the meaning of Rilke’s words a century after he wrote them.

We encourage your support to help create a performance that will let audiences experience Rainer Maria Rilke, or Tennessee Williams, or both, in new ways.  Please plan on joining us on July 23rd at 7:30pm at St. Joan of Arc Church in Minneapolis for the world premier of Autumn Song.  Ticket details here.