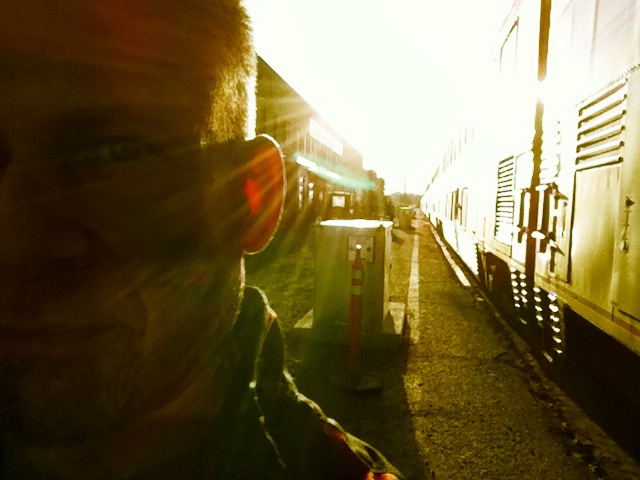 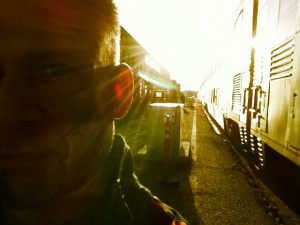 I’ve always been fascinated by trains, but not in the way some rail enthusiasts tend to be; lauding a mode of transportation that, while destined to join the American public, her industries, and her coasts together by 1876, also ended up permanently scattering her Indigenous peoples and exploiting immigrant labor in it’s rush to gain existence.  The typical rail buff seems to focus on the more romanticized profile of trains; one spending the better part of a life building an elaborate model railroad town in their basement (and then living in it), another coveting faded pin-ups of Zephyrs on the wall, or those who are able to recite every word and sing every note of The Ballad of Casey Jones or songs by Boxcar Willie.  These are a unique brand of historical hobbyist, helping to keep certain memories of a bygone era alive, preserved in miniature, fading images, and in old songs.  But quite often, there exist deeper, more relevant stories waiting to be told when it comes to the legacy of the railroads.

Trains have always represented something a little bit different to me.  I remember standing at the gated railroad crossing outside my grandma Mildred’s apartment building in Blue Island, IL; a little kid being prompted by his mom to wave, shyly, to the engineer guiding the Rock Island Express as it rumbled by, several times a day, on its way to the rail yards west of downtown Chicago. Of course, I thought the loud blast of the steam whistle  (originally referred to as a steam trumpet) was sounded just for me (and maybe it was), which only enhanced the excitement of feeling the rumbling of great diesels, of hearing the rhythmic clacking of wheels, and of seeing graffiti-festooned boxcars slide by (I usually lost count after 20 or so had passed).  But then, came the inevitable sadness as the crossing bells fell into silent respect with the passing of that final car, the red caboose  (no longer required to be used by railroads, since the 1980s). Hopefully, mom would let me linger just a little bit longer for the next one to come along.  Our collective cultural imagery also forever reminds us that we, too, all somewhat linger around for that next train, or perhaps that final one.  A powerful image in our American culture: trains. 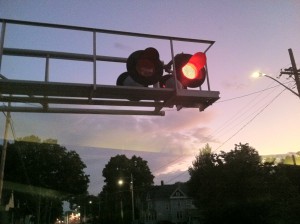 The most recent insight into my own romantic notions about trains is that my artistic imagination is inevitably affected most immediately by the sound of a train, versus the sight of one.  The long, deep, resonant pulse of a train whistle brings me right back to my childhood, yes, but this instinct seems even more primal; what great Neanderthal ancestor of ours, cringing in the dark of a cave at the howling of some great unknown beast filling the night air outside, didn’t appropriate an immediate respect for and fearful attachment to that voice of the wild?  Perhaps this is why train whistles in the night always seem mournful and distant, why the Doppler effect forever entrances yet perplexes, and why the brisk cold wind that suddenly picks up and scatters the trash outside the dark, sinister mouth of a railroad tunnel portends far more than the arrival of an immense midnight train on it’s way from somewhere to anywhere.  Trains, to me, are magical, time-traveling harbingers of what was and what may be.

Between Melancholy and Sweet Nostalgia

Train imagery has been influential for several of my projects over time: from the blues-ballad and indie film sixonefiveseven (2001), on the events surrounding the October, 1926 derailment of a passenger train in Columbus, WI  (more on sixonefiveseven later on in this blog), to my most current project, my first opera, Empire Builder, (lyric by Anne Bertram, www.theatreunbound.com ), the development of which this particular blog will largely be about as we research and prepare the script and score of Empire Builder for it’s first public reading on February 6-7, 2012  (go to See Us on the menu for more details).

And then there is the occasional spontaneous train-related piece.  In December, 2003, Larry Schug, a poet from St. Joseph, MN came up to me at a CD signing at the College of St. Benedict, pulled a wrinkled up piece of paper out of his pocket, smoothed it out on my piano, handed it to me, saying “I woke up from a dream about a train last night, and couldn’t get back to sleep, so I wrote this. You should set it to music!”

Between Melancholy and Sweet Nostalgia

I want you to hear this 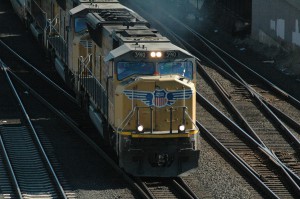 an hour before you see the light

of its great diesel engine

rockin’ through that vast grassland between

where the dreams of coyotes

outnumber the dreams of people

I want you to hear this in your sleep

I want it to wake you so you curse it

so it puts a feeling in your stomach

somewhere between melancholy and sweet nostalgia

I want you to think of faces and places

that have come and gone

loaded with grain from a plowed up prairie

and saw logs ripped from a mountain

I want you to wake from a dream 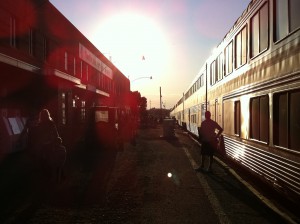 you can’t quite remember

a dream that lingers

leaves you a little bit wobbly

when your feet first touch the floor

that’s how I want you to hear this

I was immediately taken with it.  I had recently begun working on setting some of the selected poetry of the German poet Rilke to music around that time (see my blog “For the Sake of a Single Poem:  Maurer sets Rilke poetry to Music”), and my immediate thoughts with Between Melancholy and Sweet Nostalgia were of mixing organic train sounds with some more ethereal synthesized pads that evoked trains, and to then utilize the voice of long-time theater professor Tom Darnal, of the College of St Benedict, to read the poem over the top of that.  I found a recording of the last run of a steam engine before it’s retirement, manipulated the pitch to make it sound deeper, wider, and, along with manipulating a patch called “Steam Pipes” from my Reaktor software, set these as the bed to Tom reading Larry’s poem with a variety of character voices, tones, and emotions.   I utilized the ones I found useful, and in the end, I think it sounded pretty damn cool.   On the tail end of this recording of the poem, I placed another song I had started writing as far back as 1992, my first year full time on the road, a song I called Freedom’s Dust, which was my musical sketch of what the wide-open road felt like to a 20-something guy on his own for the first time.   Somehow, it seemed right to connect this to Between Melancholy and Sweet Nostalgia.

I hesitated to release Between Melancholy … on a CD project because, as one of my friends said, “it ‘s pretty damn sinister, George”, which, of course, I found fascinating.  Perhaps it was because it tapped that aforementioned ancestral, primal link within him, which meant that I was getting the reaction I wanted.  Besides, there was never a CD project I could put it on (at least not yet), because it was so different from anything I had released before. 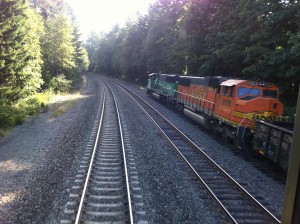 Well, if a blog is for viewing ideas and thoughts on things as they develop, then I’ll use this one to publish a few of these rough-hewn, unfinished ideas, so as to show you what goes into putting an idea together.  A blog on trains seems to be the perfect place!

Take a listen: BETWEEN MELANCHOLY/FREEDOM’S DUST

Next installment:  The story behind sixonefiveseven, and more on George Maurer and Anne Bertram’s upcoming new opera, Empire Builder.