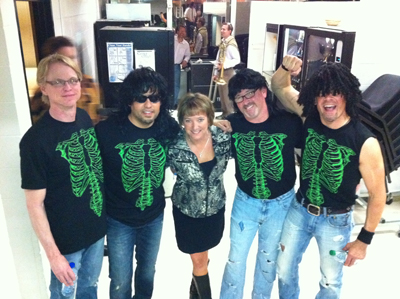 MINNEAPOLIS —Sweet dreams are made of this, at least for George Maurer and Ken Vork.

Both make major contributions to the Minnesota Orchestra’s May 6 and 7 “’80s Rewind!” concerts.

The show features a few firsts for Maurer, who serves as bandleader, vocal director and piano/keyboard player:

Arranger, composer and pianist Maurer collaborated with Vork, Paynesville High School band director and St. Cloud Symphony Orchestra trombone player, to co-arrange four songs for the show: Peter Gabriel’s “In Your Eyes,” Prince’s “Let’s Go Crazy,” Elton John’s “I Guess That’s Why They Call It the Blues” and a mash of the Eurythmics’ “Sweet Dreams (Are Made of This)” and Yes’s “Owner of a Lonely Heart.”

Eighties music certainly had no shortage of synthesizer, which makes Maurer’s stage talent — and a keyboard on loan from Fabulous Armadillo Greg Armstrong — a perfect fit. He plays piano and keyboards and leads the four-piece rock band and six vocalists who accompany the orchestra as it revisits the decade that brought us mullets, “Cheers” and acid-washed jeans.

Although he and the George Maurer Group have graced the stage in Orchestra Hall, Maurer has never before had the opportunity to play with the orchestra. “This will be the largest number of musicians I’ve performed with on stage before,” he said.

Maurer showcases some cool tricks on his keyboard, like the wind, wolf howls, slamming door and Vincent Price laugh in Michael Jackson’s “Thriller,” on which he will play two different keyboards. He gets to play the legendary opening to Van Halen’s “Jump” and the classic “Total Eclipse of the Heart,” which comes with directions to play it “overly dramatic.”

Oh, and he gets to rock his trés ’80s leather pants.

It all adds up to a new musical adventure for both Maurer and Vork as they work with one of the country’s most respected orchestras, conducted by Sarah Hicks, who will conduct Sting’s Symphonicity tour this summer.  Next up: The band and vocalists, under Maurer’s direction, bring “’80s Rewind!” to the Florida Symphony.